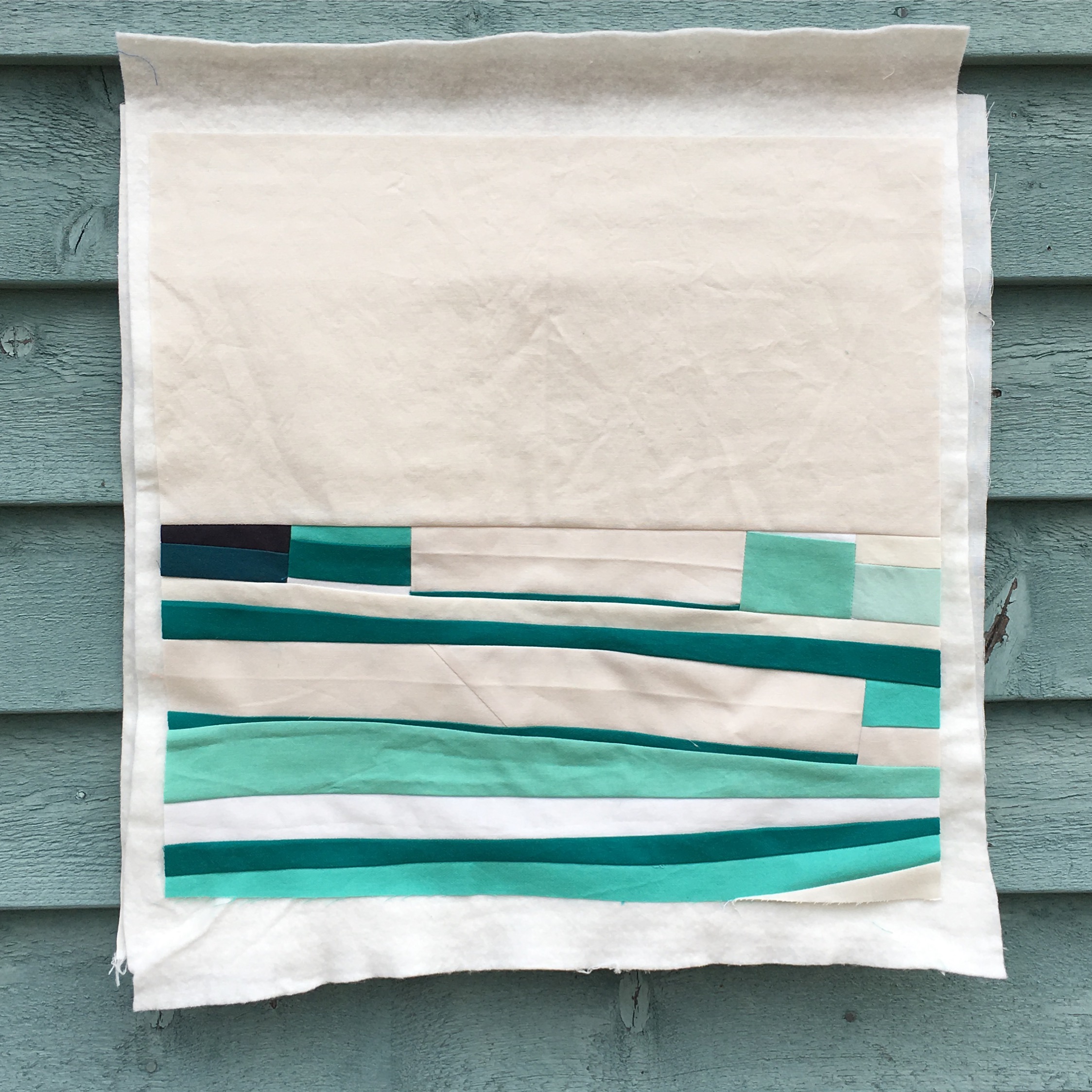 When I was in architecture school eons ago, I participated in the Canadian Centre for Architecture’s annual student “Charrette” competition. It was a weekend-long intensive project that called for little sleep and fun times with my comrades. My team never won.

The term “charrette” comes from the word for cart in French. According to Wikipedia, “its use in the sense of design and planning arose in the 19th century at the École des Beaux-Arts in Paris, where it was not unusual at the end of a term for teams of student architects to work right up until a deadline, when a charrette would be wheeled among them to collect up their scale models and other work for review. Their continued working furiously to apply the finishing touches came to be referred to as working en charrette, ‘in the cart.’” I remember that feeling of intensity and  pressure – clock ticking, adrenaline rushing. 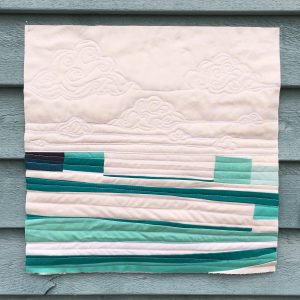 Last weekend, I spent a day at White Point Beach Resort in Queens County, Nova Scotia with my favourite quilty people of the Maritime Modern Quilt Guild. I packed some “work” — commissioned work and projects for my upcoming Halifax Crafters Spring Market, and then I packed some scraps for a to-be-determined “fast and fun” project when I got bored with the obligatory list. I would give myself an hour or an hour-and-a-half to deal with the bag of scraps: a quilt charrette. This time though, my charrette was self-imposed and the stakes were however high I wanted to make them.

The scrappy strips are cuts from squaring up fabric after I prewash it. They live in a plastic grocery bag in a bottom drawer; I’ve photographed them here in a lovely acrylic box to spare you the reality. There are many colours in that bag, so I picked an assortment of teals and off-whites, many of which show up in my Emerald Gemology pillow and wall hanging. I also brought along a small chunk of off-white.

My friend Jeannette of Seam Work is running a charity project this year to furnish each of the 72 residents’ rooms at Glasgow Hall Long-Term Care Facility with a handmade pillow. At best, this would be an item I could replicate and attempt to sell at a craft market or in my shop; at worst, a lovely resident at Glasgow Hall would have some colour and cheer in their room. The parameters for my quick project were now set:

I improv-pieced the strips together as fast as possible, cutting strips and further dividing them if I found the scale to be too big for the overall effect. Once I developed a composition wide enough to accommodate the pillow size, I joined it up with the chunk of off-white. Voilà, a landscape. I saw fields; most of my Maritime-inclined peers saw waves. 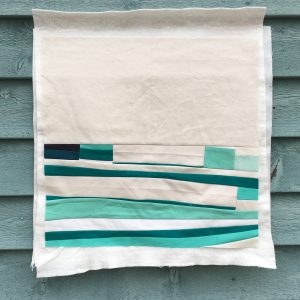 The sky called for some cloudy treatment, so I sketched in my notebook a free-motion quilting pattern, which I had to redraw onto the fabric with a Frixion pen because I couldn’t pull it off otherwise. I can’t say I pulled it off well in the end, but they are recognizable as clouds and I will continue to practise this pattern. I hope it will become my next favourite FMQ design to use, after wood grain.

Anyway, I liked the results of this charrette so much that I made another one. It turns out that this project might open doors in my work, maybe to a new audience — stretching my process, but still in my voice.