Land & Sea: A collaboration with Keephouse 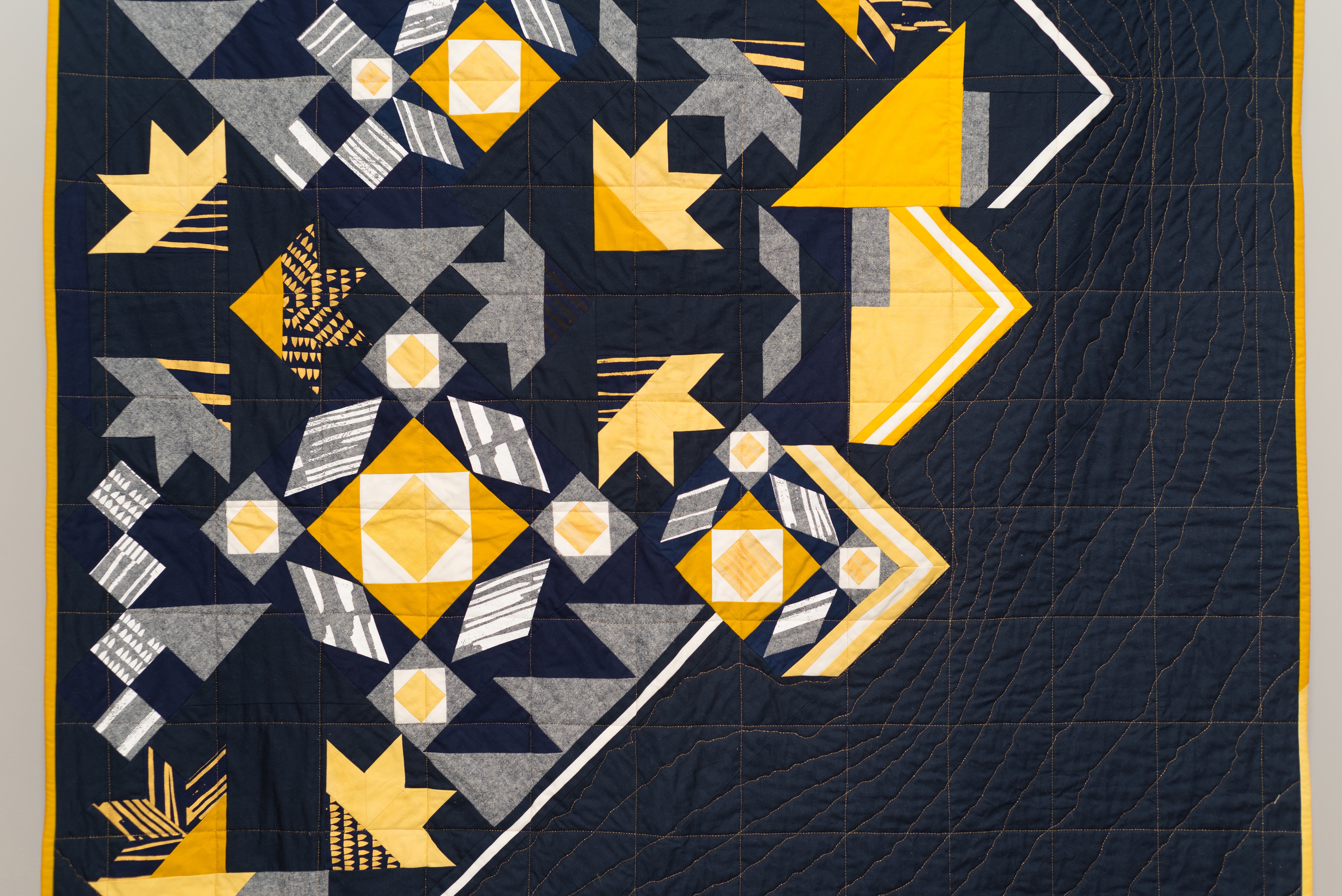 2017 marks the 150th birthday of Canadian Confederation. The country has been ramping up to this for quite some time now, with capital projects readying for years leading up to this very occasion.Quilting as a craft has deep roots in American history, but I really want to explore what stories and techniques a Canadian quilt can contain to commemorate this sesquicentennial year. I had great intentions in 2016 to get a series of one-off throw quilts off the ground, featuring different regions of vast Canadian landscape. I got “Land & Sea” finished in time for a Quilt Con entry at the end of November and another two quilts are in the works. So, it’s not really quite a series. Yet.

At my very first craft show in April of 2016, Alissa Kloet of Keephouse approached my booth and I was flattered that she showed any interest in my work. I had been an admirer of her work ever since I saw it at the first Halifax Crafters show I attended as a patron in 2012. The clean aesthetic, the clarity of handiwork in the designs, and her tagline, “Moments Made Well” — It appealed to me on so many levels. She wanted to swap some of her pieces for one of mine (as is common practice at craft shows, I have learned), so I gave her a Ruby Gemology Pillow in exchanged for her tea towels in her “Houses” print and coasters in her “Strip” print. It was completely pre-meditated but I was definitely bashful about throwing it out there, “Would you like to do a collaboration with me?” I blurted, after I chased her down the stairs back to her booth. This coming from someone who had made a total of four baby quilts, some quilted wall hangings, and 30 quilted pillows.

“Sure!” she said. A little bit easier of an answer than I expected, and I was so pleased.

That was not only the beginning of a creative collaboration, but I found in Alissa a new colleague and friend. When you’re a solo creative entrepreneur, it can be lonely. Having someone with more experience to talk to about what you’re passionate about, especially the less-glamourous elements of business, is important in keeping your feet on the ground, mind expanding outward, and heart facing forward.

Since my days in architecture school, I have had a fascination with the notions of “place” and “home.” As I talked to Alissa about this idea, she suggested that, in addition to the handprinted fabric design/produced here and about here, we include some hand-dyed fabric coloured with goldenrod plants from right outside her door. Her surroundings in Seaforth, Nova Scotia are something to behold. On my way to her studio for the first time, I stopped briefly at Lawrencetown Beach on the Eastern Shore and picked up these stones that speckled the little nook where I parked my car. I didn’t even actually make it down to the beach, a hot spot for surfers — if you ever want to surf in the Atlantic. [Brrr.]

It’s no wonder Keephouse’s work looks and feels the way it does.

I “come from away” and I have gathered in the last four-and-a-half years living here that Nova Scotians are at the root a no-frills kind of people. The harshness and unpredictability of the weather leaves little room for frivolity. This is backed up by some research I gathered before designing this quilt: “The early quilts of Nova Scotia do not reflect the elaborate taste of sections of the eastern United States — they are more like what the people call ‘common quilts,’ practical, economical, and warm. […] Even though the quilts were utilitarian, they were planned with a good eye for colour and arrangement.”1

To capture the essence of the East Coast, we chose Keephouse’s Houses and Rows (inspired by vegetation rows in a garden or crop field) designs to represent land. Navy and gold were the colours that I had in mind, and with Alissa’s suggestion of hand-dyed goldenrod, it seemed like a good fit. I love navy as a warm neutral, and with the storminess of the sea as a prominent feature of the Maritime landscape, it was an appropriate background colour.

An important part of my process is testing. For this step, Alissa and I decided on trivets – an 8” x 8” block that I would design, produce a limited number, and then the design would be integrated into the larger quilt at a later time. The block features skinny 1” strips (measuring 1/2” finished) as the coastline, defining a border between the “land” and the “sea.” Having both the land and sea on the trivet allowed me to practise my free-motion quilting skills, which I picked up from my very gifted guild-mate Linda Coolen Smith in May. 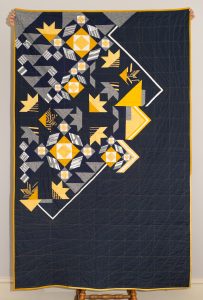 In the larger piece, the “land” is made up of traditional blocks, turned on point as many Nova Scotian quilters used to do. To add tactile texture and weight, I used Essex Yard-dyed Linen in Indigo, which tied in some of the white ink that Alissa often uses. The blocks are “Tulips” and “Storm of the Sea,” pulled from a couple of books on Nova Scotia quilts — there are only a two or three books on this topic in the Halifax Central Library and available for consultation only. (Who doesn’t want to spend some time at the library, designed by Schmidt Hammer Larsen with Fowler Bauld & Mitchell?) The blocks vary in scale, with omissions and crops. The coastline, made up of the block, is broken and pushes outward as the sea tries to encroach on the land. The irregular border where the land and sea meet required countless partial seams. Free motion quilting over a regular grid represents ocean currents and the dynamism of the sea. The composition of the quilt mimics the province’s southern shore on the map, coastline with vast Atlantic to its southeast. 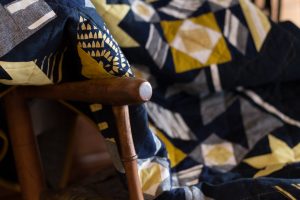