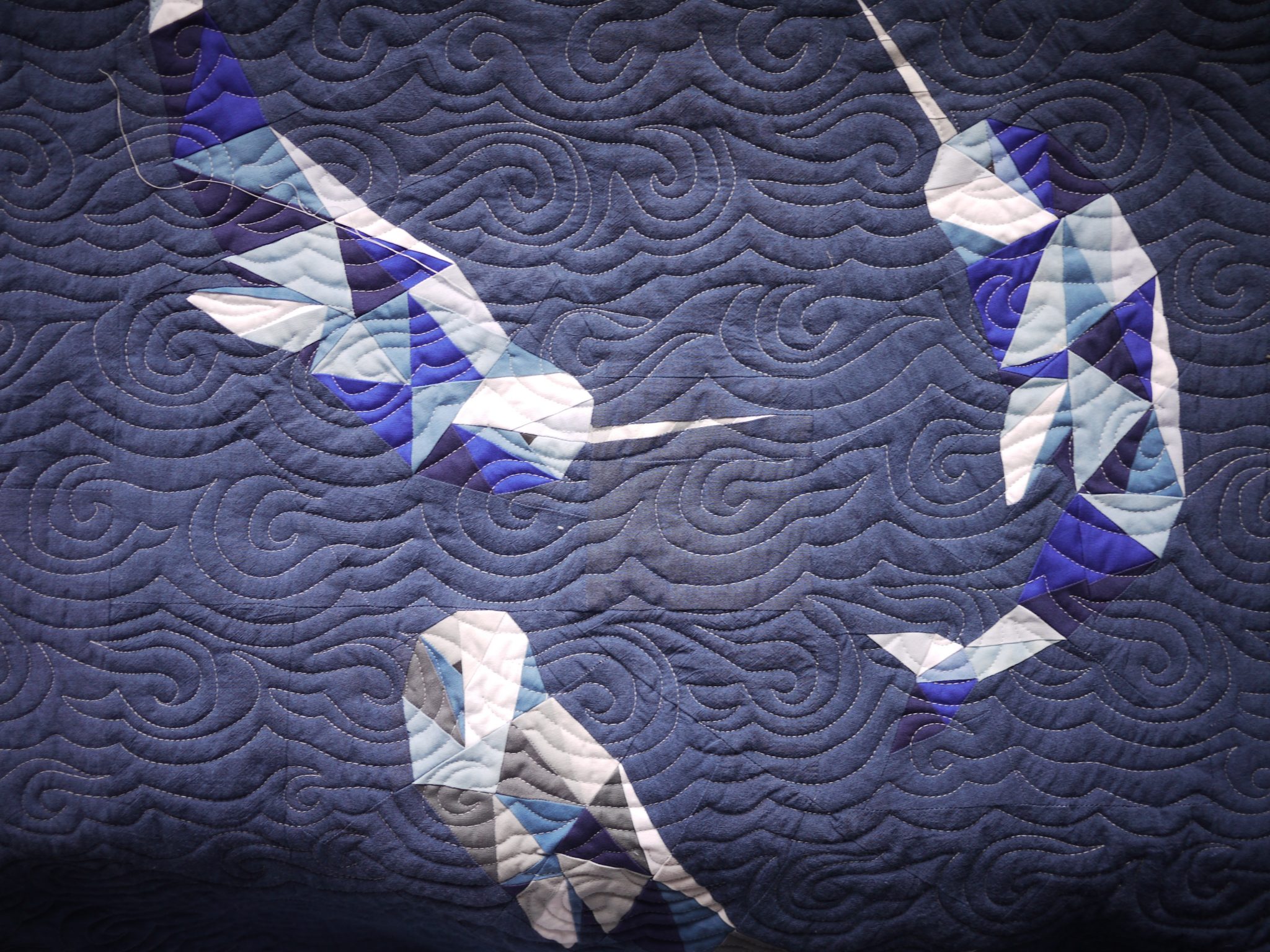 I had the opportunity to develop another pattern from a commission (first one was the Sleepy Fox pattern) and this time, I went underwater. When my son’s preschool teacher approached me about making a wall hanging for the classroom, I had in mind to try this business model again. 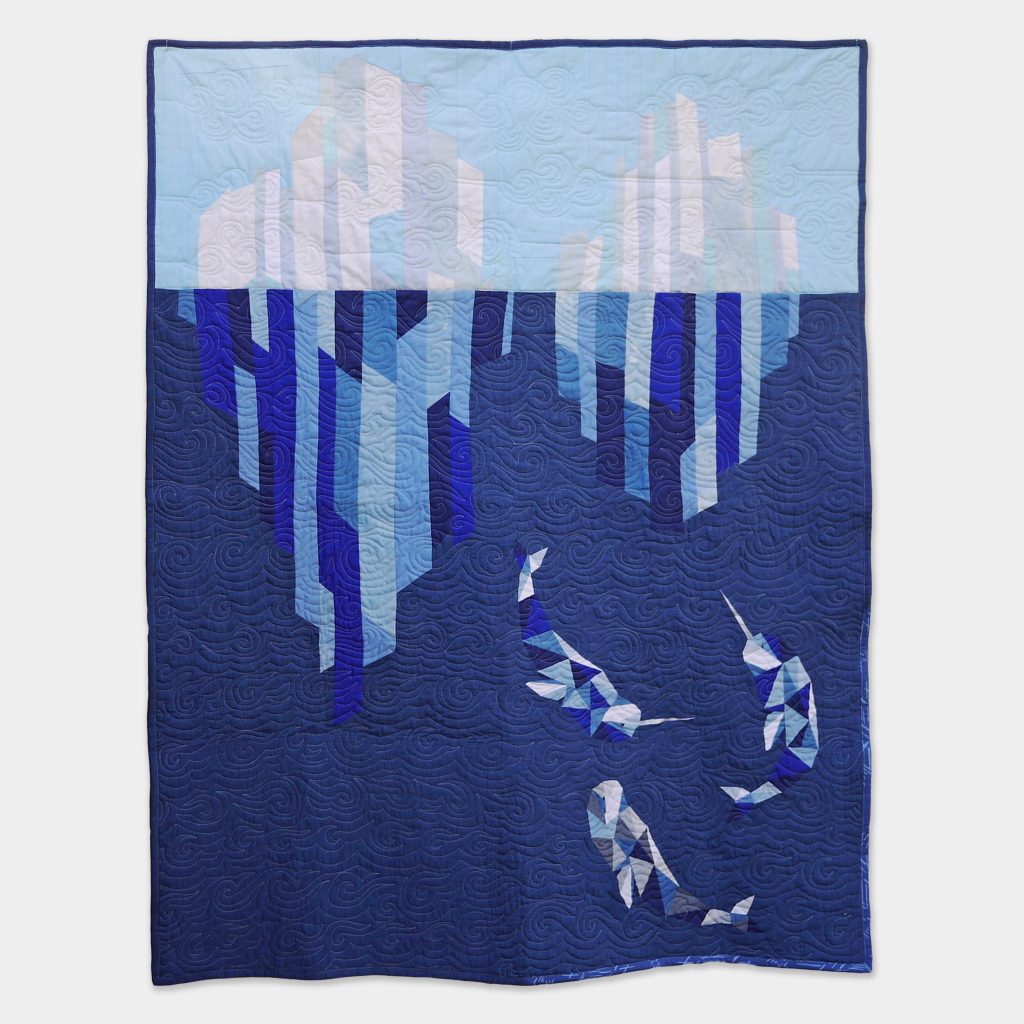 The teacher had travelled up north to Nunavut in recent years and teaches a unit on the Arctic in the winter months. I had also spotted a small print of a Lawren Harris painting in her classroom. He was a member of the famous Group of Seven, who all had their own takes on Canadian landscapes. His icebergs are powerful and peaceful at the same time. 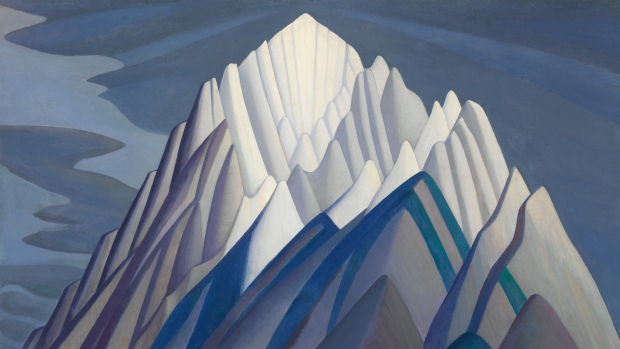 Using a similar improvisational technique to the series of pin cushions I did last summer, I constructed the icebergs with loose overall dimensions in mind. A gradation of white/baby blue/pale aqua formed the icebergs above water and deeper blues formed the underwater portions. I elongated the darker ones because most of the mass of icebergs resides beneath the surface. (Lessons learned from the Titanic, right? “Iceberg AHEAD!”) 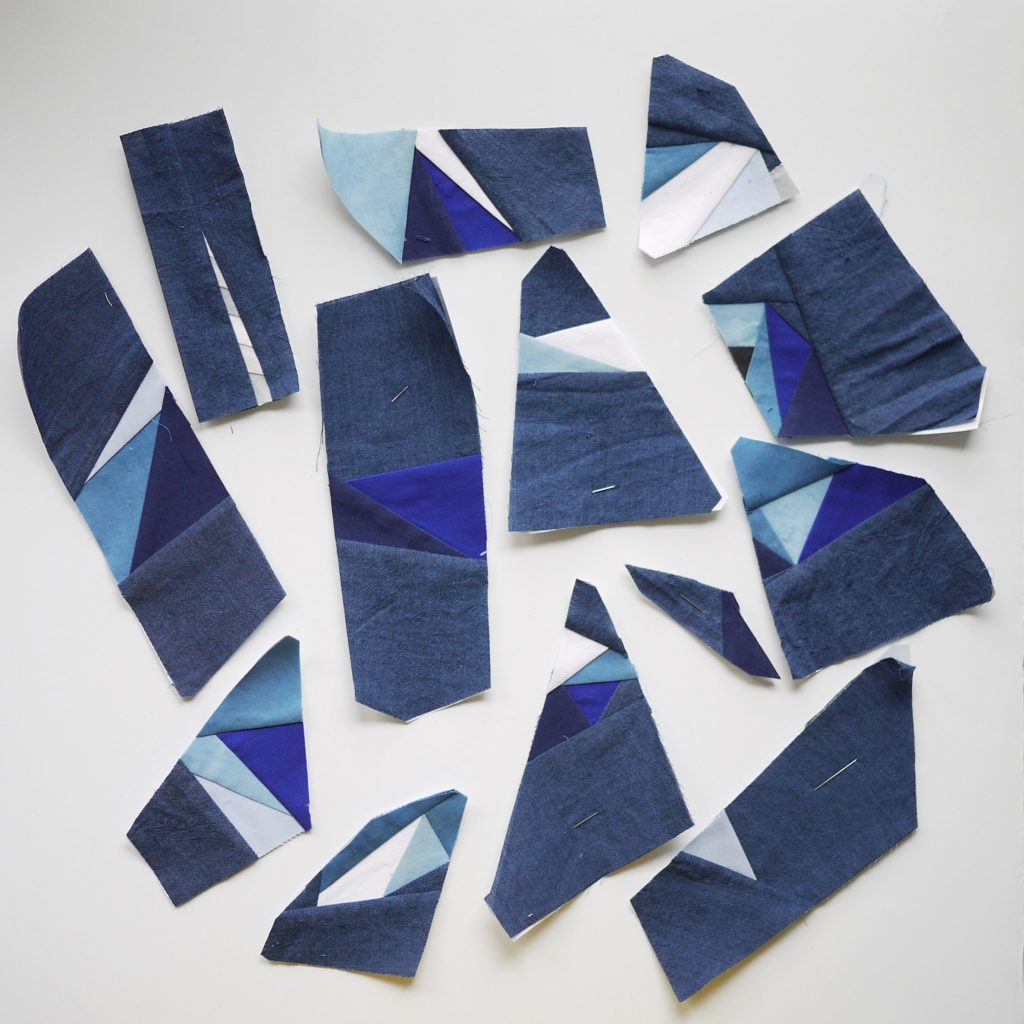 I developed the narwhal patterns simultaneously and had my faithful testers working on the narwhal blocks while I designed the baby quilt. Narwhals usually congregate in groups, so I made one of each of the Dancing Narwhal patterns. And for the third, I made a tuskless version to represent a female and used a mirror image of the pattern simply by printing it out flipped. Most printers have the ability to do this, if you can find the function in your print settings.

Instead of making the full 16″ x 16″ blocks, I omitted the extra background rectangles for the two male narwhals, and finagled a funny Y-seam to insert the female into the group. It did pucker a bit but nothing that a little quilting over couldn’t fix. 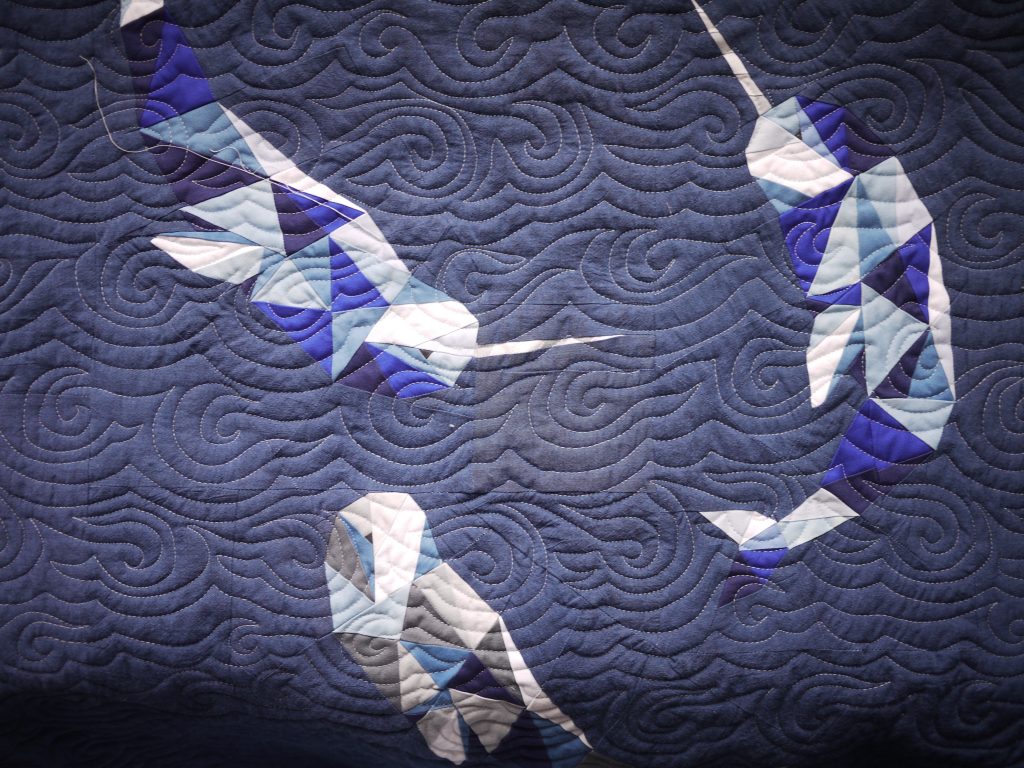 Since the spring, I have been working on free-motion quilting cloud motifs (sketches here and another experiment here). I quilted them over the icebergs and sky in a pale grey thread. 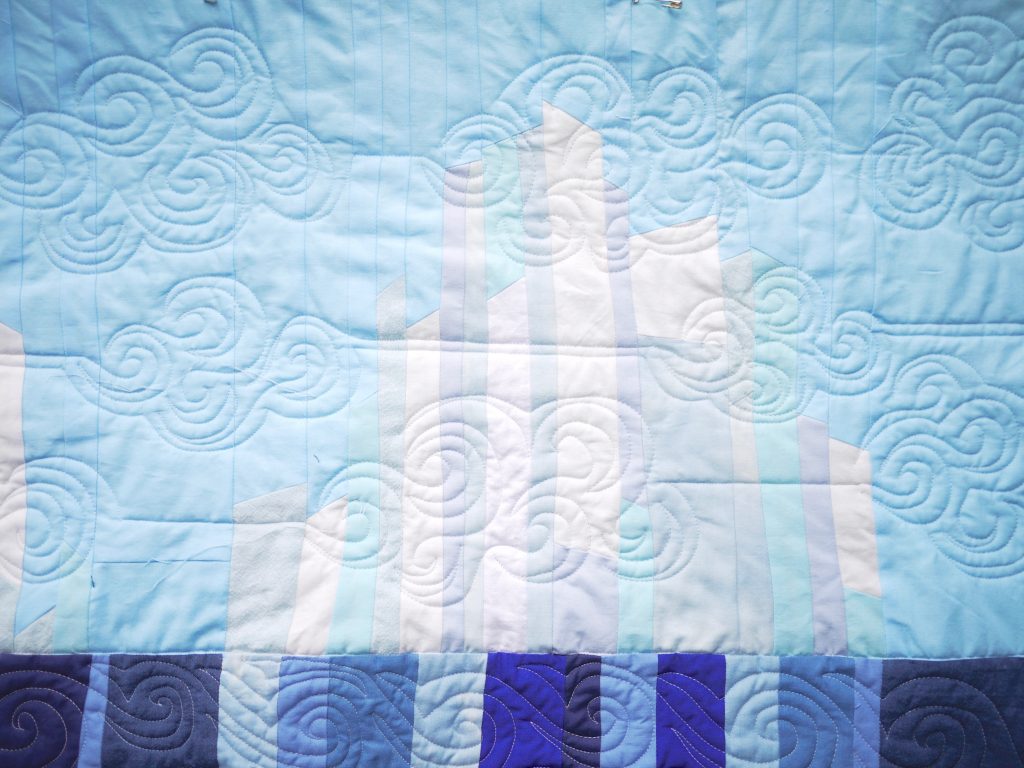 The underwater currents went edge-to-edge and I found a rhythm of spirals and echoing after a few rows. The 80-20 (80% cotton, 20% polyester) batting I used is loftier (“puffier”) than a 100% cotton. In combination with the lighter weight shot cotton that I used for the water, it added so much extra texture to the water. 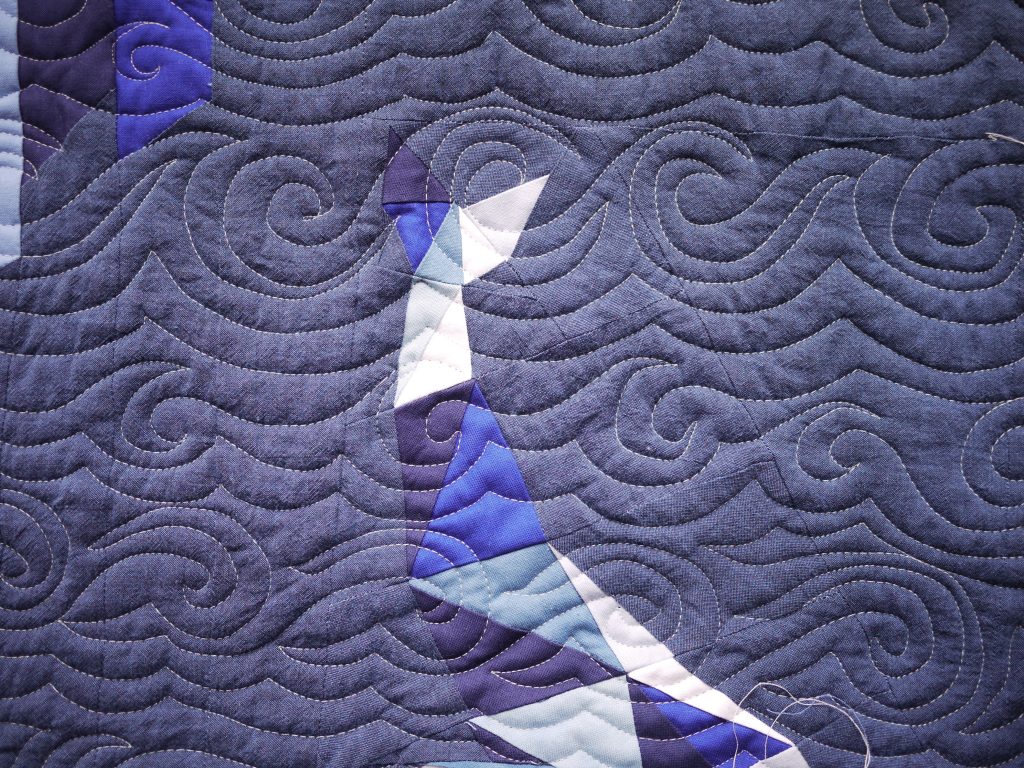 You can find the Dancing Narwhal patterns here; each comes with a tuskless option, making them female narwhals or like their cousin, the beluga. Check out some other versions of the patterns on Instagram.