This quilt is inspired by Andy Gilmore‘s digital artwork “08-25-10.” The intention was to translate a digital process of generating art into an extreme analog version. The result was 2,160 triangles in 25 different shades.  As my second quilt, this marked the beginning of an evolution in my work, where solids are used exclusively to achieve contrast – like a painter’s palette. 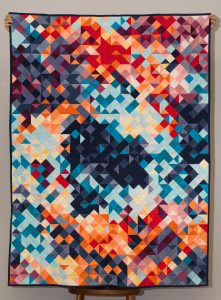 The design process began as soon as I found out I was pregnant with my second son in early 2013. And the quilt was completed when he was 15 months old — a total of 23 months later. In that time, we moved twice and had a new baby. I know that for a lot of quilters, works-in-progress or “WIPs” can hang around for years or decades even, before completion. I felt like I had to finish this one before I could move on to other projects, and I’m really glad I did. It would have held me back; finishing it gave me the freedom to move forward with my work. 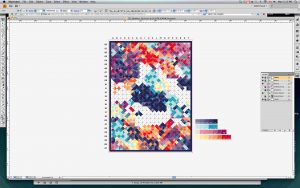 This quilt project happened before I knew what a Kona Colour Card was; I also didn’t own a Pantone Swatch booklet. So I made up my own names and swatch chart for the 25 colours. I used this handy kids’ book, Pantone: Colors, so I could reference the names in case I got mixed up. Better a $11.95 book I bought at Woozles than spending $300 on a Pantone swatch booklet (which I eventually did for my graphic design work). Too bad I didn’t get to use “French Fry” yellow.

Not unlike Jeliquilts’ Postcards from Sweden, I came up with a way to systematize the colour chaos: A two-letter code for each colour. I divided the design into 27 blocks, each containing 64 triangles. The 16 sub-units were quarter-square triangles, or “hour-glass blocks”, as I later found out.

I look back on this sophomore effort and realize how far away I am from that point now: not so much how I’ve grown as a quilter, but more so, how much quilting has become, for me, about community than solo effort. My quilting world is no longer an island; it has expanded to include my local quilt shop, my guild, the mother guild, my local Etsy community and Halifax craft community, and my Instagram feed. (The Instagram bit sounds facetious, but it is an honest inclusion! I have been active on Instagram for less than a year and it has blown up my world.) I will always see this quilt as a turning point in my creative work, and in my life as a whole. 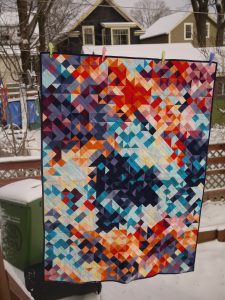